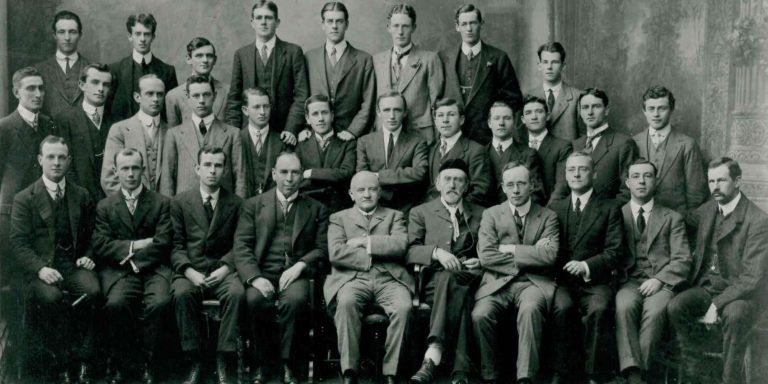 A 1913 photo featuring a number of prominent Western Australian lawyers recently found in the Old Court House Law Museum collection inspired the Armistice exhibition to commemorate the 100 year anniversary of the end of World War One. Some of the individuals in the photo were unable to contribute to the war effort, some returned after active service and some never returned.  Max Kott (pictured far right in the second row) returned to establish what is today, independent commercial law firm Kott Gunning.

Kott Gunning Lawyers is proud to support the From Law to War to Peace Heritage Conversation  to tell Max’s story and the stories of others in the photograph, both before, during and after their wartime experiences.

The From Law to  War to Peace exhibition is on at the Old Court House Law Museum till the end of the year.

Max was born in Fremantle in May 1891 and was educated in the goldfields and at Perth Boys’ School. In 1910 her began his articles of clerkship with Judah Moss Solomon Esquire and then joined the AIF in 1916. Max worked in the AIF Headquarters in London until early 1919. After the end of the War he studied at London University, and after returning to Australia he was discharged from the army and admitted to the Bar. His first practice was M Kott, Solicitors located in Weld Chambers and he was the founding partner in 1919 of Kott Gunning.

In 1949 he went into partnership with Bob Wallace and formed Kott & Wallace. Max was elected to the Claremont Roads Board and served on the Claremont Council for 26 years. He was an active environmentalist and a founding member of the Swan River Conservation Board from 1950 until 1965 and instrumental in establishing their legislation. He was a life member of the Western Australian Turf Club. Max died in 1976.

More details about the From Law to War to Peace Heritage Conversation  and Exhibition can be found on the Law Society of WA’s website and Old Court House Museum’s Facebook page.