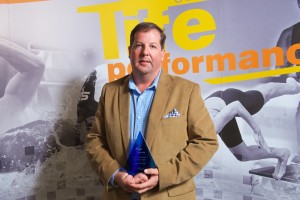 The 2015 Swimmer of the Year Awards was held at the State Reception Centre in King’s Park on Saturday, 23 May.

During the past year, Paul has helped numerous athletes achieve some fantastic results both in Australia and around the world. He helped guide Katherine Downie to three gold medals at the Para Pan Pacific Games.  Paul also guided Lennard Bremer to a silver medal at the 2015 Hancock Prospecting Australian Championships in the Men’s 200m Breaststroke and steered him to make the finals of the FINA Swimming World Cup in Doha in the 200m IM.

Paul coaches at Westside Christchurch and was the recipient of the Tier 1 level in the Kott Gunning Coach Development Program.

Congratulations to Paul and to the other nominees in this category: Matt Magee, Lloyd Roberts, Georgina Powers and Michael Shaw.

Kott Gunning is proud to be SWA’s exclusive legal partner, and naming rights partner for the new Kott Gunning Coach Development Program, aimed at increasing the number of high quality coaches in WA.

Read more about the other major award winners here